My maiden name is Sarwinski from LaSalle, IL. My grandfather and great grandfather, both named Joseph Sarwinski, came to LaSalle shortly after the Civil War and helped to establish the Polish Church and Cemetery, St. Hyacinth. I have over 150 photos, mostly portraits, of several families including Urban (my grandmother's maiden name from Peru via Pozan, Poland), Lukowski, Arnold, Kughn, Janz, Frank Washkowiak, Ludwig, Stachowiak, Holsinger, Perra, Vishinski, Carter, Kurkowski, Koenig, and many, many more yet identified. I wish to donate or locate families that would appreciate these early photographs. These photographs were identified in the 1980's by my father, Floyd Sarwinski, and a few of his childhood friends.
Peggy Calhoun  pcalhoun@att.net

Post your Family Group Sheet, Descendents Chart, etc. of a LaSalle county ancestor here with a link to your email address. 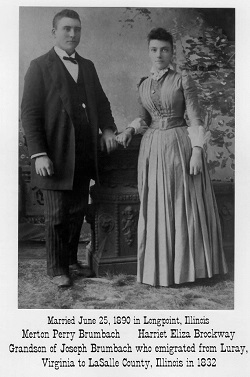 Note: Another photo from Harry Brumbaugh was unrecoverable. The caption read:
This is a very early photo circa 1865 of Joseph Brumbach. Joseph and his wife, Mary Polly (PARR), from Licking County, Ohio, arrived in Manlius Twp., LaSalle County August 3, 1832. He purchased Federal land and built a cabin there. He later acquired more land and built a large house, barn and other buildings. His neighbors very appropriately called him Patriach Joseph, as he had nineteen children and eight step-children." (Source: "History of LaSalle County" by Elmer Baldwin, pub. 1877) Two sons, Samuel Judson and Newton Warner Brumbach served with Company L, 15th Cavary, organized in LaSalle County, during the Civil War. Both where wounded and recovered. 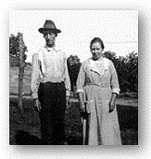 Frank Wesley Hogue and Marietta Henderson Hogue. They are approximately in their 40's. The picture was possibly taken in Marseilles. 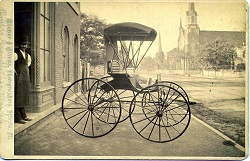 The man in the picture is George Alexander Markle who was the Markle of "Markle & Farnsworth." He was my great-grandfather. The Markle family came to Ottawa from Westmoreland County, PA, in 1857 and lived there until 1880 when they went to homestead in Nebraska. Labeled on the back: "This is an 1870 model Trans-Am, styled by Markle & Farnsworth Co. of Ottawa, Ill."
Betty Markle Marsicek

This photo “The Melody Family – out to Pat’s”, was taken in LaSalle Co. in the 1920s. Patrick J. Melody is the gentleman in the center back, his two sons, Thomas J. and Francis J. are to the right. His wife, Bridget, is center front. The other three gentleman are Melody brothers, in front being Jim Melody, my great-grandfather and his wife Matilda, the other two are named Stephen and Martin; their father was Christopher Melody. These three brothers had a fourth brother named Pat, but this isn’t him (he lived in Iowa and never married.) the Pat in the photo was born in March 1866, in Ireland, father James Melody. 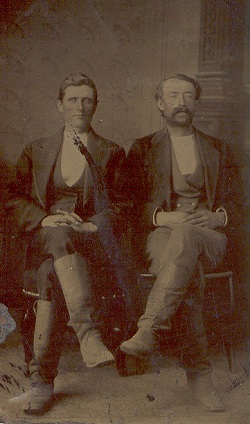 These photos came in a box of Ryan Family Photos that I received from my grandfather's cousin in South Dakota. Mathew C. Ryan arrived from Ireland abt.1848 and lived in PA, Conn and then Wisc where he died and his family then moved on to South Dakota. The box of photos had many old tin type and I believe some were taken in Ireland. Some of the photos had date of 1880 and had towns listed in Illinois. Do any of these people look familiar to you? If so, please contact me.

My g.grandmother was Theresa "Daisy"(Stager) Stratton. She was born 1871 in Peru, IL. Her parents were John and Theresa "Gracie" Stager. Her siblings were Frank, John, Paul (died at 16), Mary (Stager) McCollum, Elizabeth (Stager) Franklin, Marcus, Nick, George and Anna (Stager) Hunt. They were all raised in Osage Twp, Wenona, LaSalle Co., IL. The 2 men in chairs are most likely Stager brothers, just not sure if they are Nick, Marcus, George or John. The man in the cropped corners pic is most likely my g.uncle Frank Stager. The women pics are either Stager or Dullar sisters.

We are not positive of the identity of these pictures, we only think they may be of my Stager family.

If anyone can identify these people, email Rick at rwe38133@yahoo.com