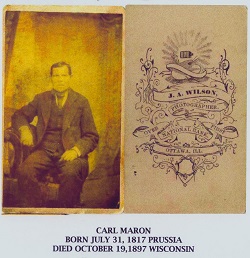 Charles Maron, of Washburn township, died Tuesday, Oct. 9, of dropsy and a general breaking down from old age, aged 90 years and 3 months. He lived with a son, and had for a long time been hopelessly ill, being compelled to sit with his feet in a receptacle to catch the water that dripped from sores on his limbs. He came here from Ottawa, Ill., two years ago with his son's family, upon whom he was a helpless charge, and who did all they could to render his last days easy. The funeral will be held this afternoon, the Lutheran pastor from Granton presiding. The family have the sympathy of all. 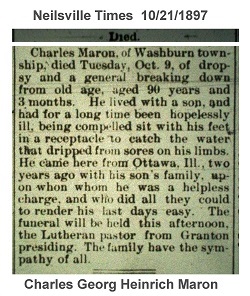 These photos were found along with "Carl" Maron's photo. Can you help identify these family members? 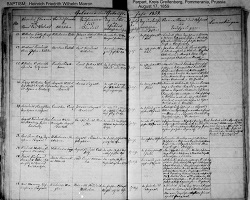 Mr. Henry Marohn was born August 5, 1859 in Parpat, Germany. In the year 1882 he was united in marriage with Miss Bertha Ehlke in Karnitz. Shortly after his marriage he came to America and settled in Ottawa, Illinois. Here he rented a farm for several years. Then, in 1895 he moved to Neillsville, Clark County with his family. Here he lived but a short time and then bought a farm eight miles from Neillsville. On his farm, however, he fought with adverse circumstances for the next year his wife died, 1896, and the following year his father. In 1898 he, himself, was taken sick with rheumatism. As all things still went backwards, he sold his farm and moved to Winneconne. He, however, was never able to do hard work. For a few years he was janitor in the west side public school. A few years later he started a small book store in this village, but he was only able to keep it for a short time as he was taken sick with facial neuralgia. He was taken to Milwaukee and underwent an operation which proved successful but for a short time. For some months later he was compelled to go to bed. He never recovered since. He died August 30, shortly after seven o’clock. The cause of death was a chronic disease of long standing. The mourners are: Mrs. Robert Umlandt and Alma. Four sons Emil, Henry, Carl, and Frederick, two sisters, and many other relatives. 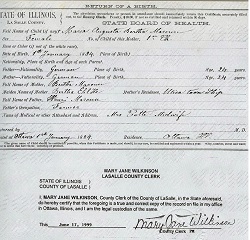 Funeral services are at 2 p.m. Sunday at St. Paul's Evangelical Church with the Rev. John Hoenecke officiating. Burial is in the Winneconne Cemetery.

Emil Marohn, 75, of Rt. 3, Oshkosh died at his home, following an illness of three years. He was born in Ottawa, IL, on August 17, 1885, son of Heinrich and Bertha (Ehlke) Marohn, and had been on his farm for the past 40 years. He retired 6 years ago. He was married in the Town of Vinland on June 30, 1915 to Miss Louise Schoenian. Mr. Marohn was a member of Zion Lutheran Church, Zion, Town of Omro, and Aid Association for Lutherans.

Services will be held Wednesday at 2pm at Zion Lutheran Church, Zion, with Rev. R.D. Ziesemer officiating. Burial will be in Ellenwood Cemetery. Friends may call at Konrad Funeral Home from Tuesday afternoon until 10am on Wednesday, and at the church on Wednesday from 11:30am until the hour of services 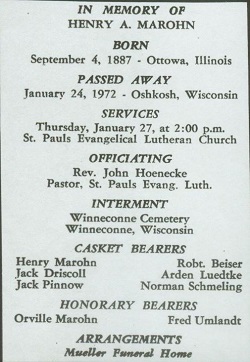 He was a life member of St. Paul Evangelical Lutheran Church, and a charter member of the cherch's Men's Club.

Survivors include his widow; one daughter, Mrs. Edward Baar, Oshkosh, and one brother, Carl, Neenah. 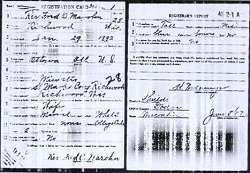 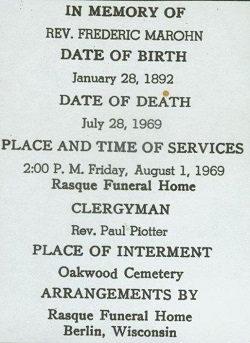 The Rev. Frederic Marohn, 77, Milwaukee, a retired Lutheran minister, died Monday, July 28 in Milwaukee. He was born in Ottawa, Illinois on Jan. 29, 1892 and was a graduate of Northwestern College and Wisconsin Lutheran Seminary, Wauwatosa. He was married to Emilie Zietlow of Berlin on July 3, 1916 at Fairburn.

Funeral services were held Friday at 2 p.m. at Rasque Funeral Home, Berlin with the Rev. Miles Bruemmer of Milwaukee officiating. Burial was in Oakwood Cemetery, Berlin.